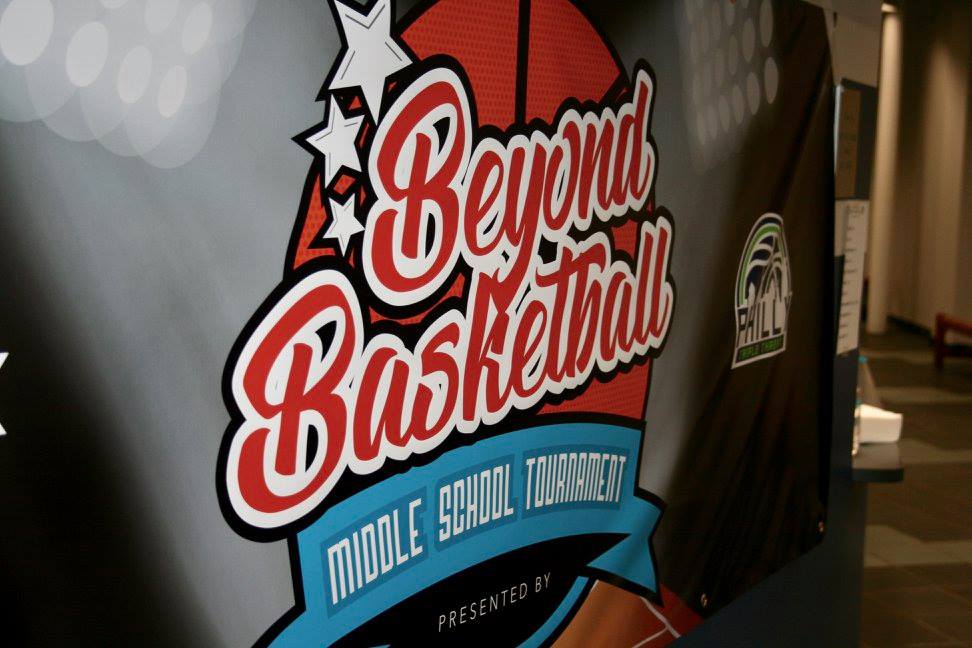 Friday evening, January 12th — Philadelphia Youth Basketball staff tie the final ribbon around a pile of freshly screen-pressed shirts. The front of the shirts read, “I AM _____” while the backs are marked with sponsor logos and the Beyond Basketball Tournament Design. The 400+ t-shirts are then stacked into the trunk in preparation for tomorrow’s events. 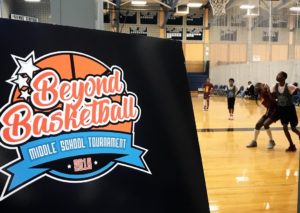 Saturday, January 13th, 7:00am — PYB staff arrive at the Friends’ Central School and are greeted by Friends’ Central’s Athletic Director, Michelle Crowley. As the minutes fly by all hand are on deck before a rush of middle schoolers, coaches and families fill the gym for an action-packed weekend. The day officially begins at 9:00am when three games tip-off on Shimada Court 1 & 2 and Linton Gym. IHM is returning for the second year with the hope to compete for a championship; a game they narrowly missed qualifying for last year. In the school division, St. James, The Philadelphia School, Friends’ Central, Hamilton and Kenderton Elementary round out the brackets. This is the first year many of these teams are competing in an organized basketball league let alone a weekend long competitive tournament, so the player are abuzz with excitement! Most notably, Hamilton and Kenderton Elementary school are both newly developed teams through PYB’s Middle School Partnership Program.

On the girls side, a mix of school and travel teams compete against each other in the same division. This is a rare opportunity to play teams outside of their normal league, which creates new and challenging match-up for the players! 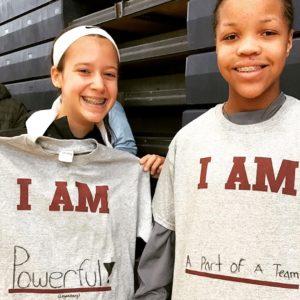 After the first round of morning games, all of the school teams are ushered from their benches to Friends’ Central’s high school classrooms. There the players are greeted by Friends’ Central high school students and Dwight Dunston, the head of Friends’ Central’s Department for Equity and Social Justice. The players eat a quick snack before participating in the tournament’s educational breakout sessions – an aspect that makes the Beyond Basketball Tournament a truly unique, holistic youth development experience. Dwight instantly captivates the players with a slam poetry rap segment that pays homage to not only the life and legacy of Dr. Martin Luther King Jr., but also the current political and social justice issues facing our nation. After gaining extreme credibility from players, Dwight hands over the lesson to his students to facilitate a discussion among the players. In the classroom there is a powerful presence that now unites the players that were opponents on the court 45 minutes prior. As the discussion ends, players are now tasked with the decision of what they will write on their “I AM ____” shirts. This t-shirt creation idea was motivated by the Lower Merion High School basketball team for their “I AM ACE” warm up t-shirt design that united the team in the face of adversity. With the teaching of Dr. Martin Luther King Jr. in mind, each player if asked to reflect upon their individuality and responsibility to others and share their message on the front of their shirts.

The games continue with an afternoon schedule dedicated to AAU/ travel team competition. With tip-off at 2:50pm, teams played their hardest with the intent to instate the mercy rule on their opponents, so they could get home in time to watch the Eagles battle the Atlantic Falcon in the the divisional round. Despite their best effort, Eric Worley’s expertly crafted schedule had all teams fairly matched and parents were forced to watch the Eagles in the lobby of Friends’ Central’s Shimada Gym! 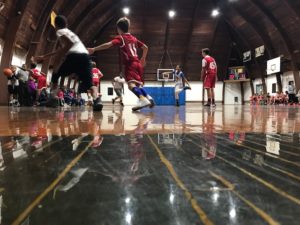 Sunday, January 14th, 8:00am — Championship day of the Beyond Basketball Tournament commences with an influx of players, coaches and spectators adorned in their best Eagles gear! After a long Day 1, the morning coffee is working hard to get the PYB staff up and running by 8:00am, but there is a clear energy that permeates through even the heaviest of eyes ignited by the Eagles victory the night before.

The morning marked the end of pool play and by 12:00pm the first Championship game was underway with IHM battling The Philadelphia School. With motivation from last year’s defeat, IHM competed hard and in the end was victorious!

At 5:00pm the final teams clear their benches and pack their bags, and the Shimada gym goes silent. And while only 6 teams left the weekend with trophies, each team left with an experience that improved them as basketball players, students, leaders and engaged citizens! 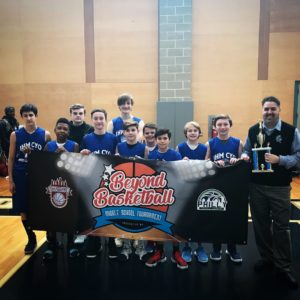 Philadelphia Youth Basketball would like to a give a special thank you to everyone who made our Beyond Basketball Tournament an incredible success, including: The Friends’ Central School, Post Brothers Apartments, Keystone First, Phresh Prints, Philly Triple Threat, and all participating teams, volunteers and spectators for respecting our sportsmanship code and setting a strong example for our young people.