** Registration for the Winter 2020 HoopHers Program is now open! ** 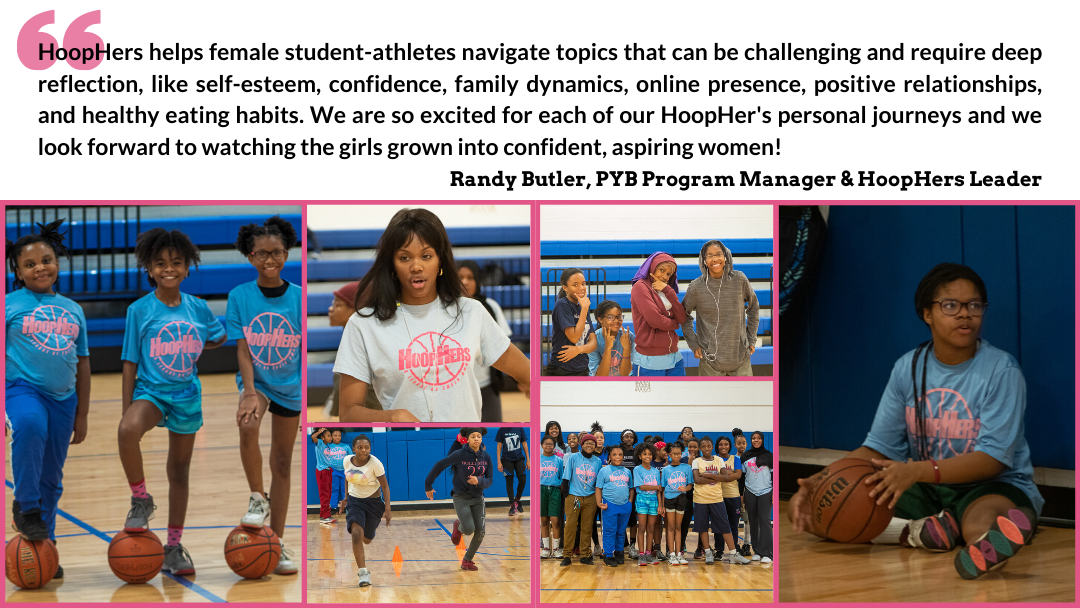 Basketball has been a culturally iconic force in the lives of Philadelphians and their communities, from city playgrounds, school gymnasiums, churches and recreation centers, to major college and professional venues. And while young boys seem to have an abundance of opportunities to play the game and reap the off-court benefits of building habits and traits of sportsmanship, self-control and civility, teamwork and resiliency, the “playing field” is not level for young girls. For example, for middle school aged girls the availability of open enrollment competitive basketball tournaments/ leagues is less than half boys of the same age. Additionally, most girls tournaments occur outside of the city limits due to gym availability and girls are required to travel greater distances to play. As a result, female student-athletes have a higher drop off rate for participation in organized team sports. Philadelphia Youth Basketball (PYB) and Philadelphia Triple Threat (PTT) share a strong belief in the transformative power of sport and positive mentorship in the lives of young people. Therefore, both organizations have partnered to create a league that addresses the disparity between the opportunities for young men and young women.

PYB has a unique opportunity to impact the lives of females through our HoopHers Initiative, an inclusive, female-based initiative with the goal to empower young women and address the challenges female athletes face. We realize there is a strong constituency of female professionals who are eager to mentor young girls and connect with other like-minded women. Motivated by our programmatic success to date, it is our goal to enhance PYB’s current programs while continually expanding our reach to new and underserved groups of girls and women throughout Philadelphia with the creation of our HoopHers Initiative.

Since PYB started programming in the fall of 2015, there have been small workshops centered around principles of female empowerment. We have organized field trips for our female student-athletes to Archbishop Carroll High School and Archmere Academy where they participated in a skills and drills session led by the high school aged girls teams followed by a lunch discussion about females in sports. Also, in May of 2016, approximately 20 volunteers and 65 middle and high school aged girls participated in the first Girls Empowerment Program put on by PYB and PTT. This day-long program included basketball skill development, competitive gameplay, and personal development activities centered around the question of what it means to be a female student athlete. Following these events, the overwhelmingly positive feedback from participants and volunteers, validated the need and excitement around a female-based empowerment initiative centered around a shared interest in basketball. Since May, PYB, in partnership with PTT and a community of female supporters, has been brainstorming new ways to engage more women and girls around our mission. Most recently there has been a strong push for the development of a winter league for middle school girls, something that is missing in the community of girls basketball in Philadelphia.

The Game Plan – A League of Their Own

Led by strong female coaches and mentors, PYB and PTT have partnered to create a middle school girls basketball league. Our mission is to cultivate a network of women and girls throughout the region that empower each other to develop a strong sense of self-efficacy and succeed athletically, academically, personally and professionally. This league will feature weekly sessions of competitive gameplay and a guest speaking program facilitated by some of the region’s renowned female leaders, entrepreneurs, athletes and more.

This league will be for middle school-aged girls that demonstrate a strong interest in basketball while simultaneously showing a dedicated attitude toward personal development on and off the court. The league will competitive game play, so girls will need to be evaluated for skills and be placed on a team that is openly drafted by our female coaches. Additionally, every session will include a guest speaker
focused around gender specific challenges that young girls and women face on the court, in the classroom and in their personal lives.

“I am so proud of the work our CHAA Summer HoopHers put into the program over the 6 weeks we were together. Their effort on the court was amazing, but their attitude in the classroom is where I was truly inspired by each and every one of them. Our coaches presented participants with topics on how female student-athletes navigate self-esteem, building confidence, family, online presence, healthy eating habits, etc.; they were challenging and required deep reflection. We are so excited for each of their personal journeys and we look forward to watching the girls grow into confident, aspiring women.” Randy Butler, Manager of Programming

Happy 4th Birthday, PYB! A word from our President & CEO

Dear Friends of PYB, June 1, 2019, marks the beginning of the 5th year of operations for Philadelphia Youth Basketball, and we are proud to report that the start-up phase of building a robust and relevant organization has been achieved. This foundational work, which...